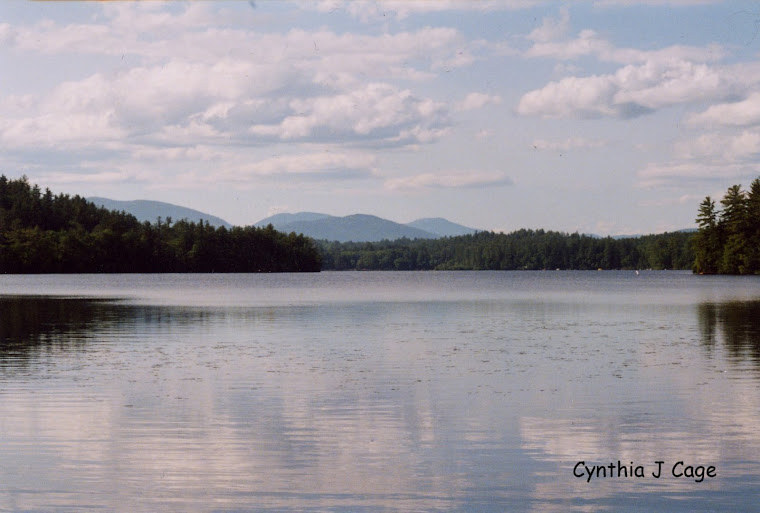 It was my first trip to Cape May to bird. I got up early and was on the road at 4:00 am to make it for a 7:30 birding walk at Rea Farm. So I literally birded from sun-up/moon down to sunset. What a gorgeous day in a gorgeous place. The only down side- hitting a deer on the way down :( . Damages to the car but no injury to me.


I had never seen a black vulture before. I was surprised that when looking at the underside of the wings of the Turkey Vulture they are two toned with the flight feathers being lighter. While the underside of the Black Vulture's wings are black with white fight feathers. Also the Black Vulture's tail is shorter and square compared to the longer, rounded tail of the Turkey Vulture.

I saw 2 American Kestrels (another life bird) but they were a little too far away to get clear pictures. They are a beautiful bird but much smaller than I thought. They were across the field from this vineyard and bluebird. We saw Kinglets, Red-bellied Woodpeckers, and Blackpoll Warblers, and heard several Carolina Wrens. The walk around the farm was leisurely and there were many knowledgeable birders along. 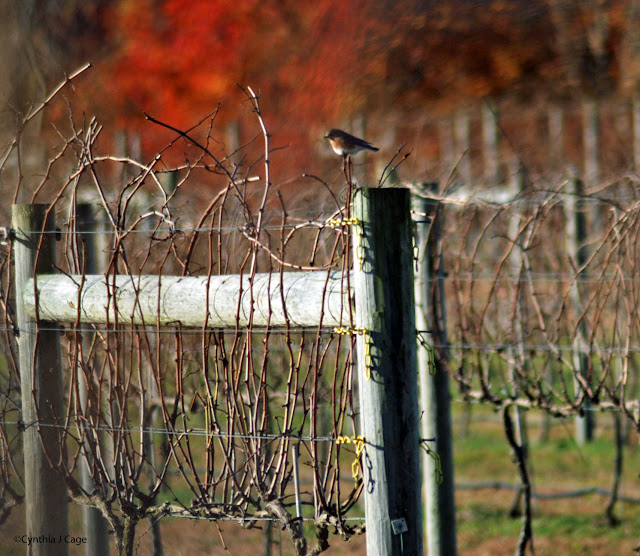 After the walk around the farm we found a bathroom at the lighthouse and then went to get some tea. I then walked around the newer birding preserve I believe called The Meadows. I saw Dark-eyed Juncos, an assortment of ducks including Northern Pintail, American Wigeon, Gadwalls, Northern Shoveler and Green-Winged Teal. 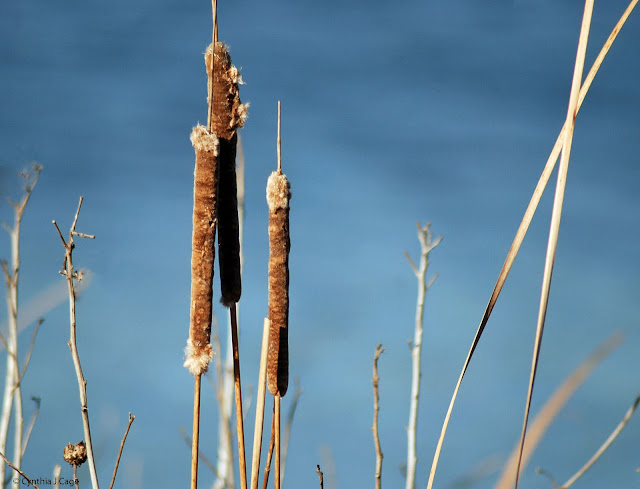 Next I went back to the lighthouse. I took the late evening Hawk watch. However, since the wind was still up there weren't many hawks to watch. So instead we took a walk around the ponds at the lighthouse. We walked through a variety of habitat. We saw Coot, Pied-Billed Grebe and an Eurasian Wigeon as well. 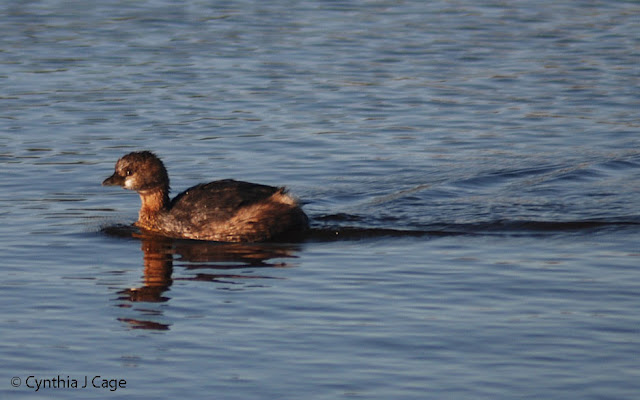 We got near the end of our walk. We were looking at some ducks and one of the kids on the walk went up to the leader and said there is a different looking swan over there. He has an all black beak. We went to look and sure enough we had a Tundra Swan. The Mute Swans that were swimming with it were actually ignoring it. Apparently they will usually run them out. Another lifer!
You can see that not only does it have an all black beak it has what looks like a yellow tear drop called a basal spot. Also this is a native swan where as the Mutes were introduced from England. It was a great way to end the day. And then there was the sunset.... 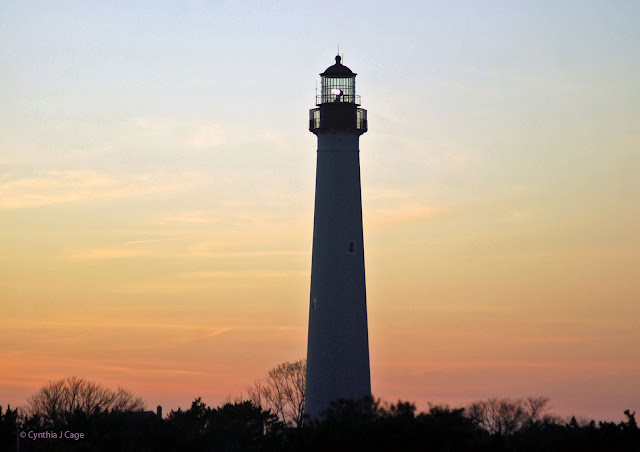 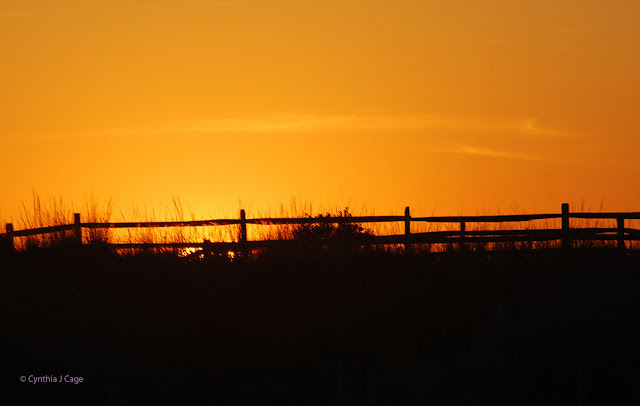 What a great day. I hope you enjoyed the day as much as I did. The ride home was smooth as I didn't hit or even see any deer on the way! Thanks for stopping by.
Posted by Cindy at 8:50 PM 8 comments:

Sparrows and More, Allen's Meadow with the BwBTC Gang

To echo what everyone else has said, what a great day with friends and birds! We arrived soon after sun-up to the Community Gardens at Allen's Meadows, Wilton, CT. We saw some great birds and had a wonderful time getting caught up with one another and learning more about new friends.
﻿

If you ever get a chance to go birding with this group don't hesitate - its such a fun group of people with a lot of collective birding expertise. I'm already looking forward to next years meet up!
Posted by Cindy at 9:02 PM 5 comments:

An Evening Walk at Breezy Point

I visited my friend at Breezy Point, Rockaways, Queens, NY. After dinner we walked along the beach for awhile. There was a beautiful sunset. Nice evening with a friend. 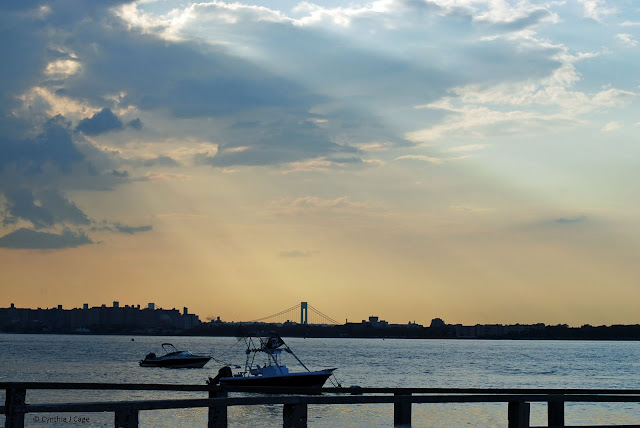 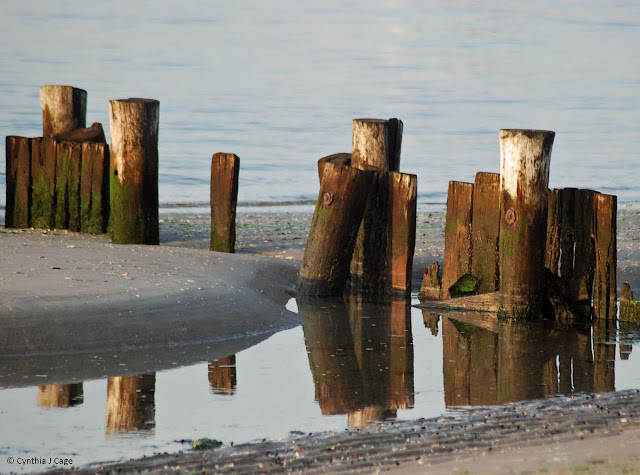 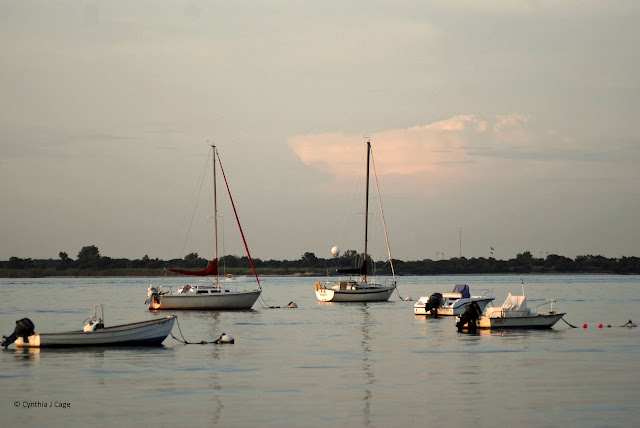 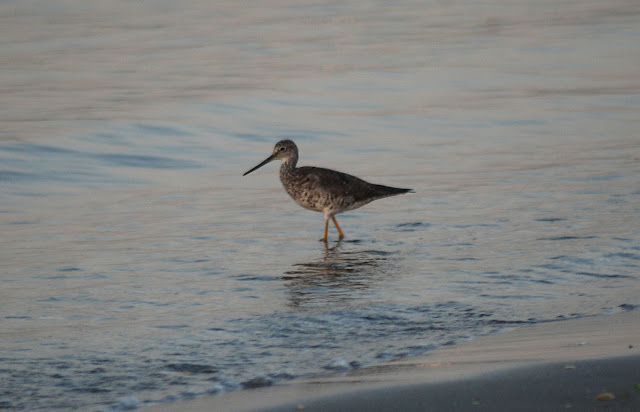 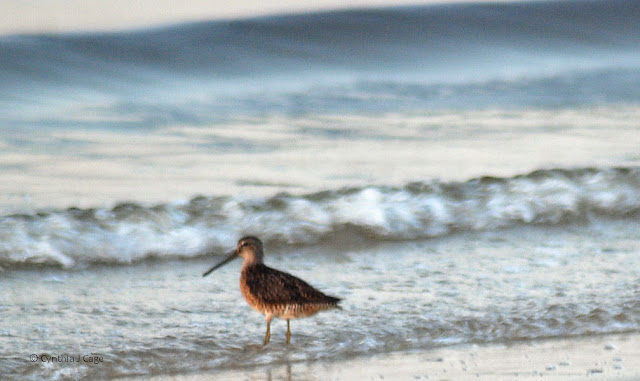 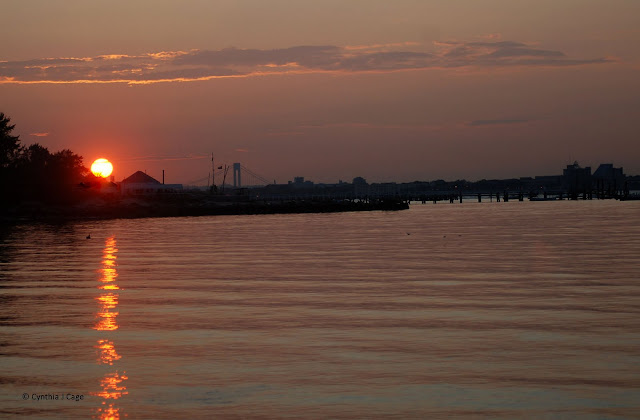 Last Tuesday after Jamaica Bay we went by Coney Island to see if we could find the reported Gray-headed Gull. It didn't take long. Those around watching, noticed that his flight feathers looked a little ragged as well as a couple seemed to be missing. Still a beautiful bird. ﻿So glad we got to see it. I hope the bird will return to the Palm tree sprinkler or be relocated so others can continue to see this gorgeous bird. 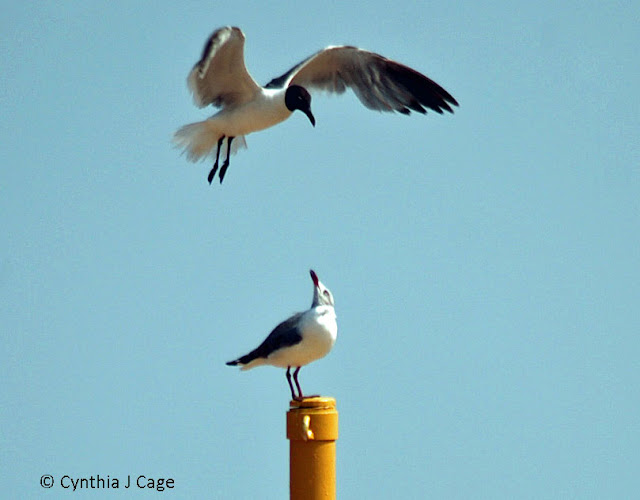 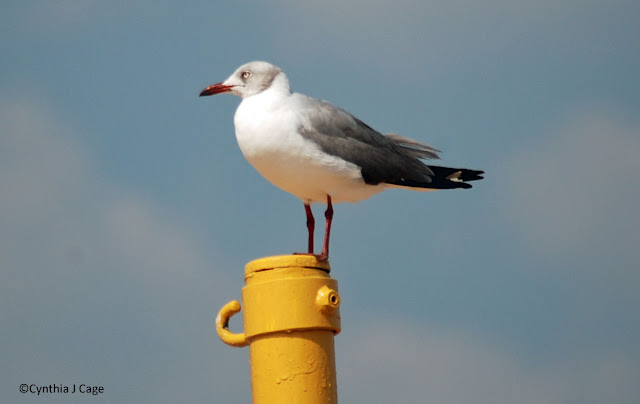 There wasn't a lot going on in the heat at the West Pond at Jamaica Bay but John's Pond had a lot of action. A fishing Great Egret and 3 juvenile Black-Crowned Herons and an adult Black-Crowned Heron. There were a few foraging assorted shore birds.﻿

In Maine, where I try to escape to as soon as school is over, we found a nesting Eastern Phoebe over the kitchen door. It is the perfect place; a small ledge under/protected by a porch. The first day there I could see two little beaks coming up when mom arrived, but mom was also still sitting. A couple days later I could make out three babies. On the last day as I took pictures there were four babies with open beaks! 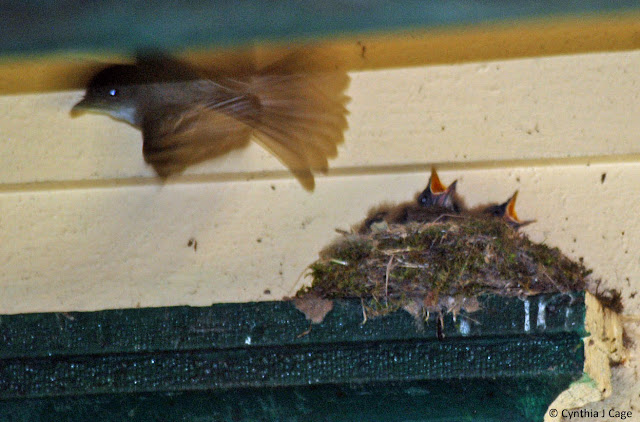 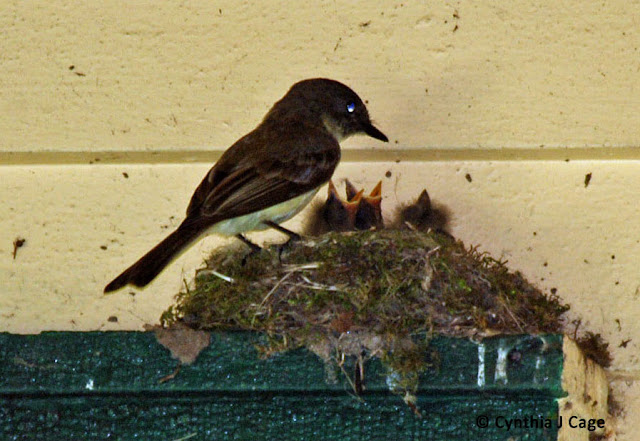 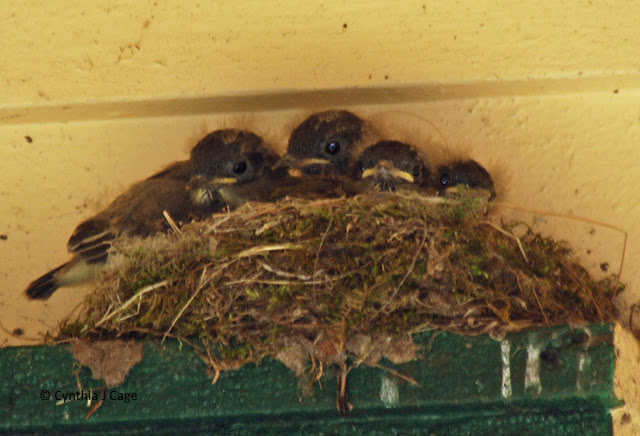 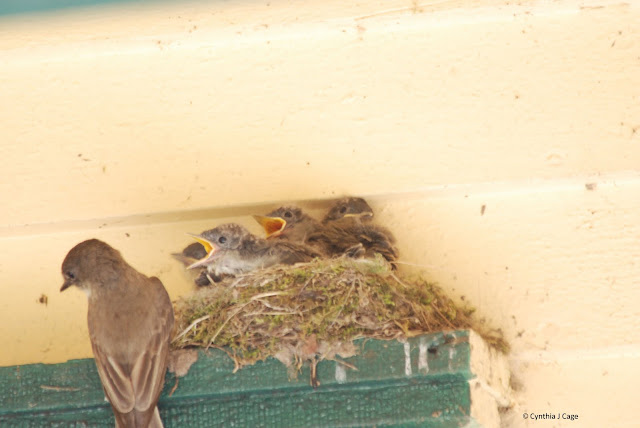 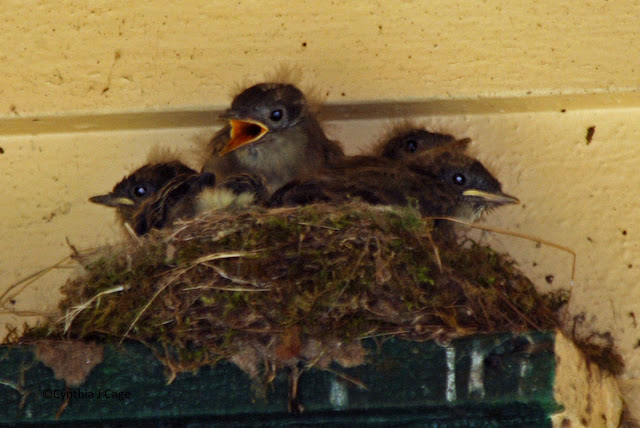 When I returned from Maine I went to Breezy Point to see Common Tern babies. I found babies of all sizes and ages. Those still under mom are 1-3 days old usually. They were so much fun to watch. 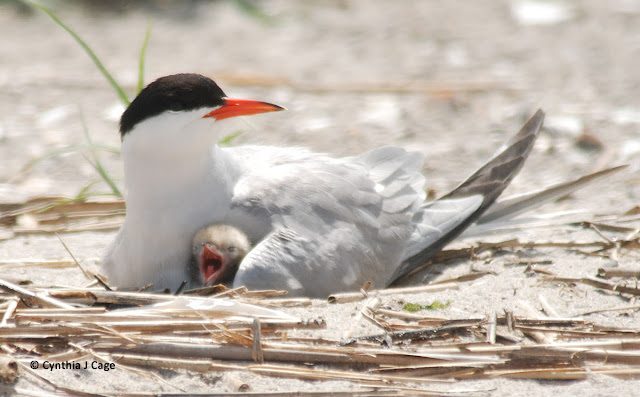 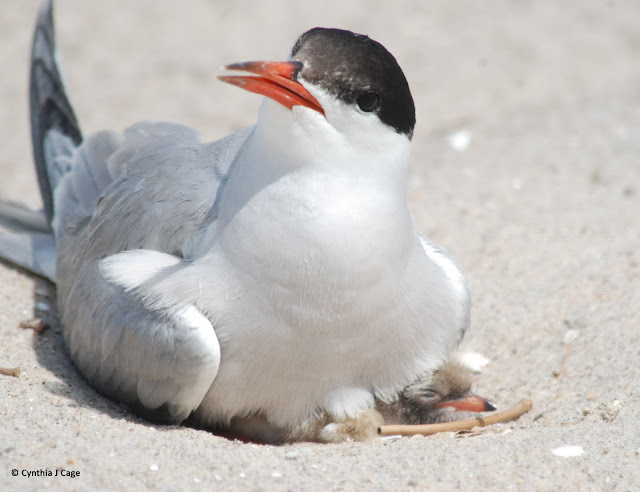 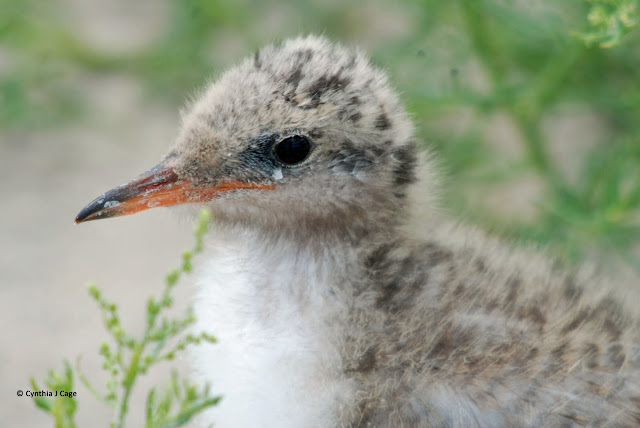 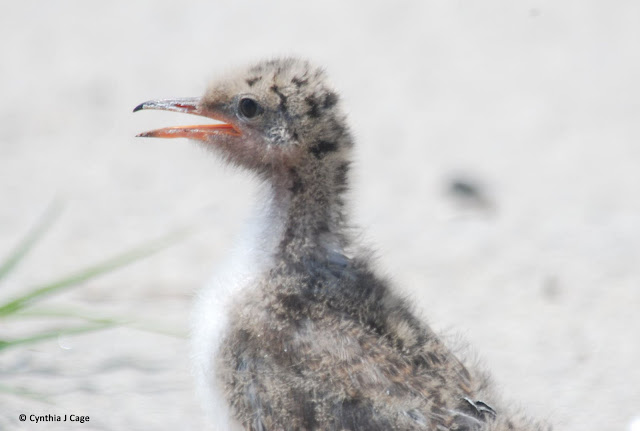 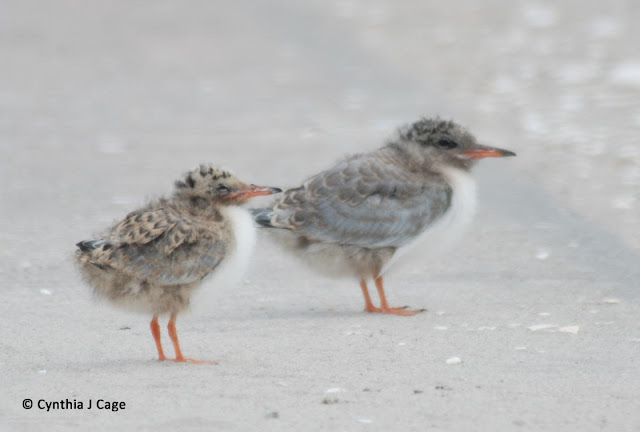 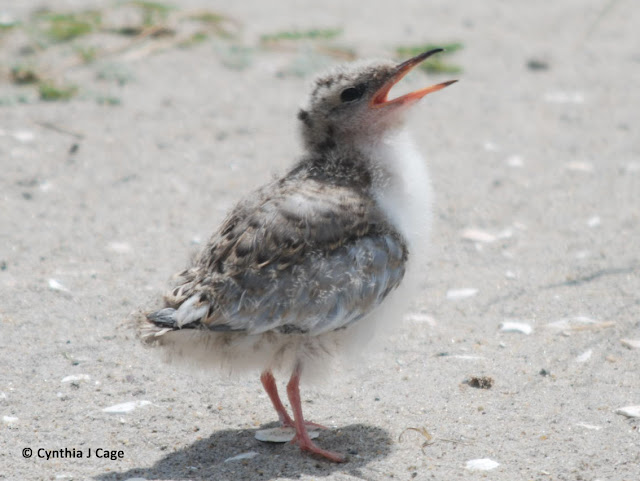 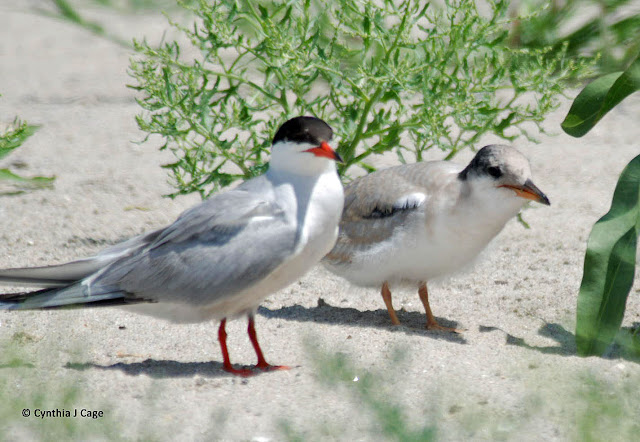 Hope you are all enjoying the summer. Shore birds are coming back, Yeah!

Cindy
I am a retired teacher in Brooklyn, NY. I love Maine, nature and taking pictures. I've realized that I love observing bird and animal behavior. I have done extensive genealogy research on my many family lines and researched the history of the school I worked in to celebrate it's 150th anniversary in 2011.This blog lets me share my travel, the birds I see, my photography and comments.

Places I link to